Seair Inflight’s August-September 2009 Issue is now onboard. It’s cover feature are the beaches in Romblon. Also check out my contributions for this issue. The exquisite accommodation in Batanes, Fundacion Pacita feature “Room at the Top” written by Chip Childers and a feature on 145° Fahrenheit entitled “Steak Side” written by Ces Rodriguez. Once again, thank you to Seair Inflight team for the opportunity. Read on for the Editorial Note.

Issue Contents:
There’s a new ‘it’ word: staycation. It means, well, staying at home for a vacation or going on day trips near your home. It was coined last year, but seems to have expanded its scope these days to include holidaying in your own country. It’s ‘on-trend’ in these recession-ridden times.

“So, are you going on staycation?” I ask myself.

END_OF_DOCUMENT_TOKEN_TO_BE_REPLACED

I just got back on a 4 day Photo Assignment this morning from Baguio. It was a jam packed 4 days into the Cordilleras but it was really interesting. I actually like this assignment as the story is in line to one of my interest. As usual, I can’t divulge anything until the issue comes out but it I’m really excited on how the writer would treat this story.

It was raining most of the time in the afternoon but I love the hanging mist there as it adds to the mood of the shots. I already miss the cool weather and the mist. Usually I just visit Baguio in transit but after this assignment, I may explore further. 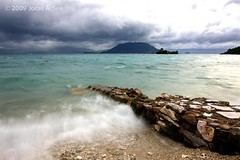 Got some breathtaking shots of some less familiar but stunning locale in the Philippines? SEAIR InFlight Magazine is looking for those photos and if you’ve got something to share, do send them in and get a chance to have it published. Seair Inflight Magazine is personally one of the best designed with solid content magazine done locally. So it’s a nice platform to expose your work. Check out the details:

END_OF_DOCUMENT_TOKEN_TO_BE_REPLACED

Now on board Philippine Airlines flights is the June 2009 issue of Mabuhay magazine, PAL’s Inflight Magazine. It was a pleasant surprise when I got a copy of the issue as the cover story entitled “Secrets of Mindoro” was my photography and writing assignment work for them on one of their destinations, San Jose, Mindoro. Too bad I didn’t get the cover for this one (cover by Jerome Bonto) but I’m still glad it got the main feature on this issue as I was expecting only to be one of the inside features. Also in this issue I got two more photos for Kota Kinabalu with writer John Oates. Checkout the editorial note and contributor’s feature to know more about the issue.

END_OF_DOCUMENT_TOKEN_TO_BE_REPLACED

This is a very special issue for me since it is actually my first cover work for Seair Inflight Magazine. The cover photo was shot in the beautiful rugged island of Batan in Batanes. This one was a really challenging assignment since it involves hours at the sea along ripping waves and some bad weather at times. I even got seasick and threw out my very heavy lunch on the first day. We originally had some other shoots for the cover but I also kinda like this one since it goes well with the title of the main story “Desperate Angler” written by Chip Childers . More details about it later, but for the meantime read on for the editorial note.

END_OF_DOCUMENT_TOKEN_TO_BE_REPLACED

Backpacking nine countries for 50,000 pesos is the bold marketing claim of the most recent book by Robert Alejandro entitled “The Sketching Backpacker “. Published by ROX (Recreational Outdoor Exchange) Philippines, the book aims to entice local backpackers to do a circuit around South East Asia and some parts of China on a measly budget. Being a long time fan of Robert Alejandro’s graphical works, I was excited about this book, but does it deliver as it was purported to do?