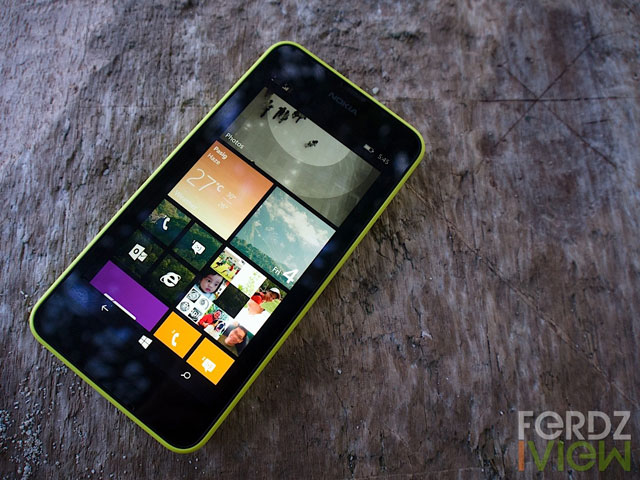 It’s been more than a month since I got the Nokia Lumia 630 Dual Sim phone. I was fortunate enough to be one of the first owners of the unit even before it was released in the market. I shared the main specs on the Lumia 630 here when it was launched sporting the new Windows Phone 8.1 Cyan OS upon release its release. These latest line of Lumias is kind of a bittersweet for Nokia as it would be the last few handsets sporting its label after Microsoft has fully acquired its phone division. Whether its legacy would live on in a different brand, that we have to see but for now these latest handsets is Nokia’s last hurray. Excellent hardware has always been the strength of Nokia and will the new Windows Phone 8.1 finally strike the right balance between its feature and performance in the budget range?

Comfortably sized on hand with its rounded edges and a ClearBlack 4.5-inch screen surface. The display isn’t the sharpest but the image has very good detail, punchy colors, high contrast and has excellent viewing angles. I just wish it has ambient light detector so display would automatically adjust depending on the lighting conditions.

The colorful polycarbonate shell seems to be the trademark of Lumia phones like this one. Minimal design makes it look neat with only the camera and speaker holes at the rear, side buttons for the volume and power, usb interface on the bottom and headset jack at the top. This one also has a removable case though like the Nokia X to access the battery, memory card and sim compartment. It’s also a good way to change color of the case if Microsoft will make them available as accessories. Overall the Nokia Lumia 630 is nicely designed with an overall good quality feel.

Windows Phone 8.1 in the Philippines

The main feature of the Nokia Lumia 630 is the Windows Phone 8.1 operating system. The system has definitely grown since the last year when I tried it out. Among the noticeable features is the Action Center which is basically a notifications dropdown version of Windows. Users are also now able to put wallpapers in tiles and a multitude of options for the lock screen for customisation. Windows Phone 8.1 now also has Motion Data which tracks user’s motion aside from location. It’s very handy for Fitness tracker apps which I found in Windows Phone to be quite plenty aside from the pre-installed Bing Health and Fitness.

For the Philippines though, utilisation of Windows Phone 8.1 is limited for one, we don’t have Cortana (the windows version of IOS Siri). The free Nokia MixRadio is also not available due to region restrictions which is quite a shame.

In terms of the app management and storage though, Windows Phone 8.1 now has the option to move apps from SD card or back to its internal memory. Storage Sense can manage apps and media file storage. And for a time  windows phone users has been clamouring for a decent file management app, in 8.1 we already have the Files app which is a basic file explorer.

I’m still not sold on the mobile version of Internet Explorer browser as their site rendering is still not in par with Chrome or Safari. Even the alternative UC Browser failed on some rendering test for me.

The Windows Phone Store has plenty of apps and has grown considerably but still it’s not yet running alongside Android or IOS. Yes, the essential apps have ported well in Windows Phone like Facebook, Twitter, Instagram, Viber etc but sometimes the features are not as rich as their counterparts in other system. Say for example Instagram is still in Beta for a long time. Good thing though, there are very good alternatives which I thought was even better like 6tag for instagram and Cloud6 for Dropbox to name a few.

The 1.2GHz quad-core Snapdragon processor is good but the 512mb RAM can be restrictive. Luckily, Windows Phone 8.1 isn’t as memory intensive as Android. The window tiles are smooth even from switching to apps when on regular use. But when it comes to handling multiple apps, that’s where the hiccups occur. Like for 6tag, the app crashes when I apply the tilt-shift filter or opening larger photo image sizes. Spotify could be spotty and crash if there are multiple apps in the background open. So to put it simply, 512mb is okay but things would be a lot smoother and stable if it had been 1gb ram.

Battery life is much better than most sub 2000mAh batteries. The Nokia Lumia 630 can last up to 2-3 days for me charging every other day on regular use.

It is clear that the target for this phone are budget conscious consumers who could use a couple of numbers in one phone. Nokia Lumia 630‘s implementation is pretty easy to figure out. Separate message boxes and call logs for each. When a call comes in, it shows which number is called. Lumia 630 cannot accept calls at the same time from both numbers. It would be a busy signal from the one calling.

The Nokia Lumia 630 only has 3G connectivity (the upcoming Lumia 635 would be LTE capable). Both slots are able to use 3G data one at a time. In the settings, users can toggle on which SIM mobile data would be used. I experienced no Wifi connectivity problems here as well.

Ever since its Symbian OS, Here Maps (formerly Nokia Maps), have been one of the strongest feature of Nokia and it still is with Windows Phone 8.1. Here Maps is snappy, even offline, it locks into location fast. I even had the chance to use both Google and Here on a walking navigation in provincial city and found Here Maps a lot more accurate.

The Nokia Lumia 630 only has one camera found in the rear side which is a 5MP Auto Focus shooter and surprisingly has good pixel quality for a mobile phone cam sans a LED flash. The camera interface is reminiscent of the Nokia Camera we found in the Lumia 1020. We add ‘lenses’ app to extend the camera feature. As expected on its price range, there’s no front facing camera for video calls (or selfie shots).

Music player is straight forward and simple. I wish there were presets or sound enhancement options or an equalizer . There’s a Video player but I can’t seem to import videos via the Windows Phone App for Mac which is what of the shortcomings I see when transferring files. I hope Windows Phone 8.1 would have an app that can transfer files via WiFi which Android and IOS have in abundant.

More than one month is enough for me to gauge what the role of my Nokia Lumia 630 Dual Sim will be. My sentiments with Windows Phone remains the same, it’s a sleek and simple but beautiful operating system made better with the improvements on WP 8.1 Cyan but is plagued with limited features due to regional restriction here in the Philippines (c’mon give us Nokia Mix Radio!). Windows Phone Store is also beefing up fast with very good alternative apps to staple favorites like Instagram.

The hardware is exceptional with good design cues and above average display. But there were compromises to keep the cost down which is quite understandable really. Like for the packaging, it doesn’t include a headset or a usb cable. There’s no front facing camera or LED flash but the image quality is better than most 5MP shooters.

So would I recommend the Nokia Lumia 630 Dual Sim? I’d say it’s a very good option for a Dual Sim unit for this price point of Php 7990. Good design and reliable hardware, full featured phone for every day task and the Windows Phone 8.1 boast of noticeable improvements and beefed up store with almost all favorite apps ported already. If you’re not yet hooked with the other operating systems yet, this would be a good time to try Windows Phone, but as of the moment it will personally remain as my support phone.

This site uses Akismet to reduce spam. Learn how your comment data is processed.