It’s almost half of the year but just have to update my portfolio on this site. Had been fortunate to have a bunch of my festival images on this year’s Phoenix 2018 Calendar. Wasn’t able to get a copy though so will have to make do with these PDF files. Featured images on the calendar are El Nido’s Barotuan festival held every January, Palo-palo festival in Batanes held every August, Agal-agal festival in Tawi-tawi every September, Higantes festival of Angono celebrated every November and the Giant Festival of Pampanga lights up every December. Check out the images below.

END_OF_DOCUMENT_TOKEN_TO_BE_REPLACED

Late May 2015, I became a part of a group of nature and news photographers to capture images during a photo safari organized by Oceana Philippines. Each of us had our own styles and strengths ensuring we show different facets of the protected seascape, Tañon Strait. For six full days, traveling from Bantayan Islands of Northern Cebu to Dumaguete south of Negros Island, we visited beaches, island hopped, snorkeled, dived, strolled through historic towns, shopped at dry fish markets, went on a river cruise, walked on mangrove boardwalks, stayed a night at a reef station and chased dolphins in the wild. It was an exciting expedition where we were thankful for favorable weather conditions allowing us to easily capture the wonderful scenes during the trip. A set of carefully curated images were printed and became part of a travelling exhibit which includes the World Ocean’s Day exhibit in Libis and toured in parts of Cebu and Dumaguete. Half a year later, we got excited too hear that the planned coffee table book was already out, sooner than expected. The book “Images of Tañon Strait”, is like the culmination of this project.

END_OF_DOCUMENT_TOKEN_TO_BE_REPLACED

I have worked with the Dornier/InFlight team for quite a while now and most of the time, the assignments had been really interesting much like the Cebu-Bohol “Escape Into the Wild” and the Laguna Lake Loop “Slice of Art” story. I like working mostly as a photographer with a team comprised of a writer and sometimes the art director as I’m more focused on shooting than interviewing for the story. For this five-day Bicol assignment with InFlight Traveller, I was with writer Monica de Leon and and Art Director Jocas See. We were accompanied by our guide, the Bicolano Man himself, Renato Jao. This assignment was pretty close to me as for the very long time (I think 10 years) I get to go back to my mom’s hometown which is Daraga, Albay. I used to spend summers here when I was a kid and I really like how the places has developed from what I remember. Also in this issue is a feature on one of my favorite resorts in Palawan, Qi Palawan. Check out the spreads below and hopefully you get a copy at the nearest bookstores like Fully Booked and National Bookstore.

END_OF_DOCUMENT_TOKEN_TO_BE_REPLACED

Eagle Creek is celebrating its 40th Anniversary of Inspiring people to Travel with their tough and efficient travel gear from backpacks, luggage, packing cubes and other travel accessories. As part of Eagle Creek Philippines celebration, they have weekly activities for their “Eagle Creek Travel Educational Campaign”. I was tapped to speak for their “Travel Photography 101” session which was held last week at ROX, BGC. I am in the midst of a project in El Nido Palawan and it was timely I was in Manila for a week and was available to do this talk. We had an overwhelming response of more than 80 people reserving their slot for the session. As expected since it was a weekday and a challenge to go to the venue with the traffic, more than half of the sign ups attended. Thank you very much to the people who attended as I enjoyed that little talk. There’s also a post-event contest happening for attendees. Read further for details.

END_OF_DOCUMENT_TOKEN_TO_BE_REPLACED

The guys at InFlight Traveller always seems to stretch and challenge my capabilities in capturing out of the ordinary stories. In my recent assignment, I had to document paddling adventures from kayaks or stand-up paddle boards. That means getting wet, risking my camera to the sea and hell we had to cross a couple of sea channels in one instance. Then there’s the thing about shooting fireflies in a full moon which proved quite tricky but hey it’s much better than shoot ghost stories which I did before with them. Couldn’t have done it without our awesome guide Buzzy Budlong of IslandBuzz Philippines. Feature is written by Oggie Ramos. It was one of the most fun assignments I did. The issue should hit the newsstands by now at your friendly neighbourhood bookstores. In the meantime, check out the spreads here.

END_OF_DOCUMENT_TOKEN_TO_BE_REPLACED 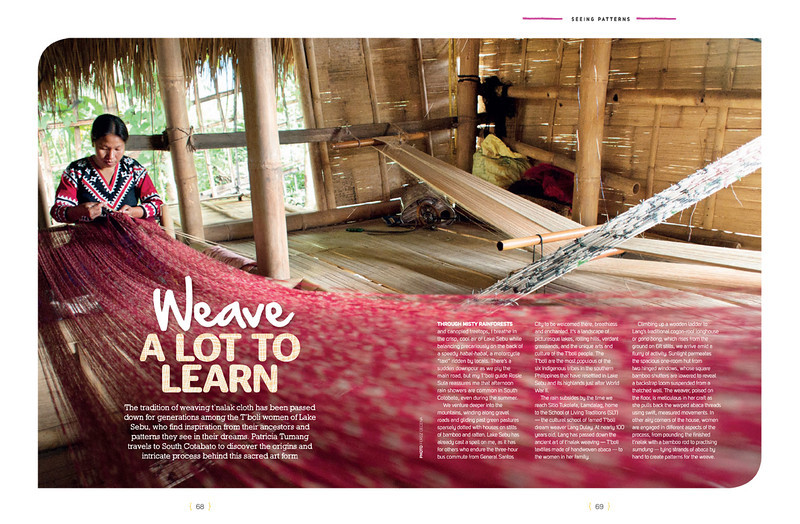 Lake Sebu is one of my favorite places in Mindanao and is one of my early explorations in the area. The Tboli people and their weaving are featured in the month’s Cebu Pacific Air’s Smile Magazine. The story “Weave a Lot to Learn” tackles on the Tboli Dreamweavers. Also featured on the story are some of my images, from the opening spread to the next two pages. You can read the online version of the story at the CebuSmile website.