Late May 2015, I became a part of a group of nature and news photographers to capture images during a photo safari organized by Oceana Philippines. Each of us had our own styles and strengths ensuring we show different facets of the protected seascape, Tañon Strait. For six full days, traveling from Bantayan Islands of Northern Cebu to Dumaguete south of Negros Island, we visited beaches, island hopped, snorkeled, dived, strolled through historic towns, shopped at dry fish markets, went on a river cruise, walked on mangrove boardwalks, stayed a night at a reef station and chased dolphins in the wild. It was an exciting expedition where we were thankful for favorable weather conditions allowing us to easily capture the wonderful scenes during the trip. A set of carefully curated images were printed and became part of a travelling exhibit which includes the World Ocean’s Day exhibit in Libis and toured in parts of Cebu and Dumaguete. Half a year later, we got excited too hear that the planned coffee table book was already out, sooner than expected. The book “Images of Tañon Strait”, is like the culmination of this project.

END_OF_DOCUMENT_TOKEN_TO_BE_REPLACED 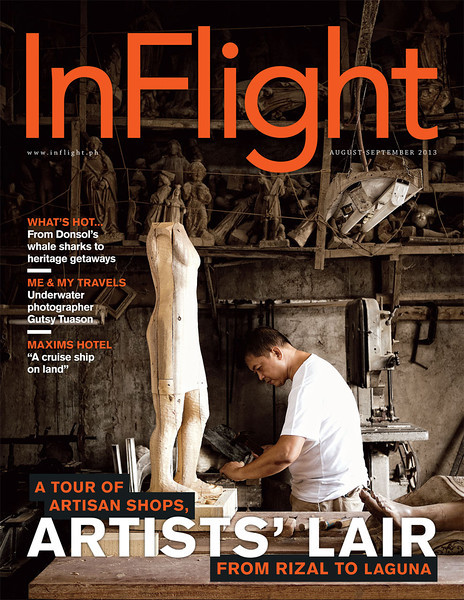 This has got to be my most interesting photo assignment yet. Don’t get me wrong, I love destination features like beaches, hotels or even some adventure activities. This one is literally closer to home. I must thank the staff of Inflight Magazine for trusting me to do this cover feature which I truly enjoyed to do. In the feature story “Slice of Art” we get up close to the rockstars and superstars of art from the different provinces of Rizal, from Laguna’s Paete, Lumban, Liliw then all the way to Binangonan and Angono. It’s such a humbling and inspiring experience to meet the art masters in real life. Makes me want to go back and paint again. The story is excellently written in detail by Monica de Leon, I admire how she funneled out all the important details because for me they were just too many. Kudos also to Jocas See for the Art Direction and the well thought out layout, it couldn’t have been presented better. Mark See also lends his wonderful map illustrations in the story. It’s been a while since I really enjoyed an assignment and hope you get to enjoy this one too. So grab a copy of the InFlight Magazine August-September 2013 Issue at Seair flights and also at NAIA terminal booths.

You can also grab a copy of the latest issue as well at the upcoming Philippine Travel Mart at the SMX Convention Center this September 6-8, 2013. In the meantime you can also add the Inflight Facebook Page for updates.

END_OF_DOCUMENT_TOKEN_TO_BE_REPLACED

I’ve been living in Palawan for almost 3 months now. I’m currently based in El Nido, Palawan taking up a temporary job here but prior to that I worked on a very exciting project in Taytay for NoaNoa Island, a Palawan Private Island Estate that is now open for rentals and bookings. I stayed in the island for 11 days working on the design and also taking some of the photographs for the website. It’s quiet, serene and the reef surrounding the island is probably the best snorkeling I have seen. (Take a look at my Underwater Shots here).

END_OF_DOCUMENT_TOKEN_TO_BE_REPLACED

The client just wanted a single page website with everything on it. They needed it “yesterday” since they have the event in the next few weeks. So I got their brochures, soft copy of their text and materials and whipped out the easiest with the most presentable I can muster. Even if it was a 1 page site I wanted it to look nice and consistent with their brochure materials so decided to use their main image as the whole background. Used CSS3 and HTML5 to make it responsive to different browsers. Even it was a single page site, a navigation was still needed to reach the site sections so anchors were used within the page. As an aesthetic addition, I decided to add Javascript Scroll for a more fluid navigation. So there goes a single page website that has a responsive web design feature. Check out www.goldbeyond.com

If you are flying Jetstar Asia this June and July, don’t forget to check out the latest issue of Jetstar Inflight Magazine June-July 2012 issue. I got write-ups with photos about the food in Angeles City. Many thanks to Tin and Rico of  Angeles City Tourism Office for assisting in this assignment. Angeles City is an emerging food haven that I would certainly go back there just to eat.

END_OF_DOCUMENT_TOKEN_TO_BE_REPLACED

If you’re flying on board Philippine Airlines this April, check out the latest issue of Mabuhay Magazine April 2012. Their main feature is Palawan but I wrote a short article on Pandan and Tibiao Antique. It’s very interesting and a good alternative if you’re visiting Boracay. Pandan Antique is just 30-45minutes away from Caticlan. Check it out. In the meantime, here are the images used on the article.

END_OF_DOCUMENT_TOKEN_TO_BE_REPLACED

“Just show up on your mat and you’re already h

Always an honor to share practice in different loc

I'm cooking something up and will announce early t

"A happy man is too satisfied with the present to