Backpacking nine countries for 50,000 pesos is the bold marketing claim of the most recent book by Robert Alejandro entitled “The Sketching Backpacker “. Published by ROX (Recreational Outdoor Exchange) Philippines, the book aims to entice local backpackers to do a circuit around South East Asia and some parts of China on a measly budget. Being a long time fan of Robert Alejandro’s graphical works, I was excited about this book, but does it deliver as it was purported to do?

The book, larger than your average trade paperback spans 231 pages of recycled paper. Flicking through the pages, I’m just amazed by the numerous sketches found on this book. Being an artist myself, I really appreciate people who can doodle fast yet retain the distinct character of the subject he is drawing. It is not an easy task and it is a skill honed through many years. Robert Alejandro’s sketches of the French Colonial houses in Laos, the familiar Le Village hotel in Kuala Lumpur, the bustling scene of Khao San Road and train transit scene in China to name a few were brilliant. 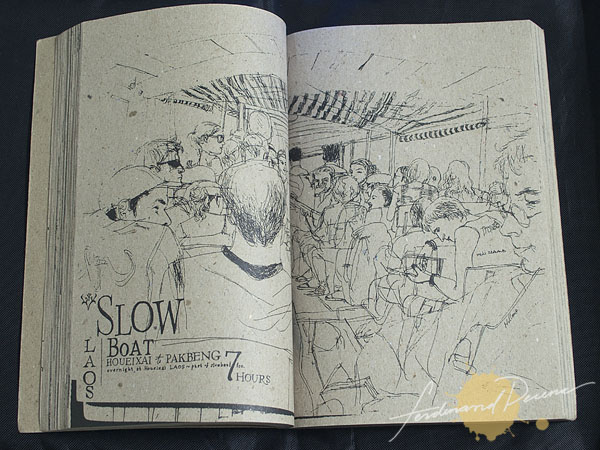 Having been around most of the countries in South East Asia and some parts of China as well on a backpacking trip myself, I have no doubt that it was possible to do the trip (going chronologically from Singapore, Malaysia, Thailand, Laos, Cambodia, Vietnam, China, Macau, Hongkong and finally back to the Philippines) for 50,000 pesos, but I was more interested to read how Robert Alejandro and his friends went through their journey for 10 weeks. While the books has some moments like Robert, loosing a bag early on during the trip, a friend of theirs being hospitalized after eating a Happy Pizza (with sprinkles of marijuana) then seeing dead people while on a highin Cambodia and enduring a 20 hour hard seat train ride to Shenzen which I find captivating. I noticed that the author tired to narrate some events and impressions here and there, but a lot of the details of the trip and how they go about it are literally “sketchy”.

I did find some general facts about the destination and accommodation recommendations useful, but I found the content lacking in details like the road conditions, park fees, who were their operators on their Halong Bay trip or where’s a nice cheap place to eat to name a few. I know Robert Alejandro tried to convey the experience through his sketches but it really doesn’t offer more than that along some short captions. It’s hard not to compare this book to “26 Days Around the Philippines” by Carlos Libosada which is also filled with illustrations and exciting run through of going from one place to another in excellent detail. The later book, which is also published in the Philippines, way back in 1999, is still personally one of the best backpacking guide done and published by a Filipino. 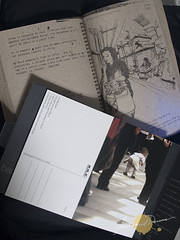 Bottom line, the book “Sketching Backpacker” is 80% art book and 20% description and detail. If you are looking for a guide on how to backpack around South East Asia on a budget, it’s still best to buy those shoe string guides. Also, their routes through the 9 countries is more on the tourist trail, it’s a lot useful if you want to visit only key highlight destinations on a country but if you want to veer away from the tourist trail like most backpackers do this one doesn’t give that many suggestions aside from their “Secret Wall Tour” in China. However, if you are a fan of Robert Alejandro and appreciate the art side of this book it may be worth your while.

The “Sketching Backpacker” is available for P390 standalone at Papemelroti. ROX also sells them on bundle with Jetro Rafael’s Backpack Photos which is a nice postcard compilation of photos during their trip for P750.

Ferdz Decena is an award-winning travel photographer, writer and blogger. His works has found print in publications such as Singapore Airlines’s Silver Kris, Philippine Airlines’ Mabuhay, Cebu Pacific’s Smile and Seair InFlight. He has also lent his expertise to various organizations like the Oceana Philippines, Lopez Group Foundation, Save the Children and World Vision, contributing quality images for their marketing materials.

This site uses Akismet to reduce spam. Learn how your comment data is processed.